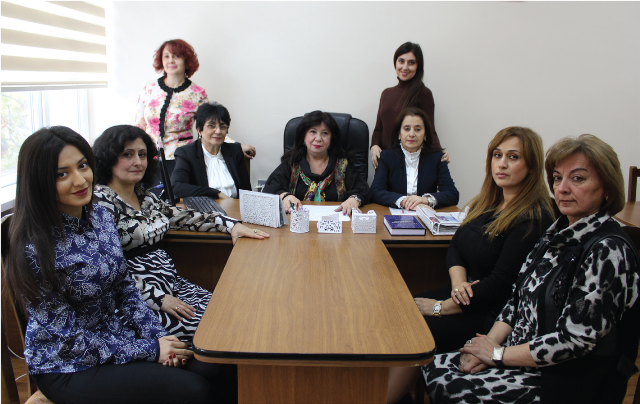 The two-year Azerbaijan State Institute of Teachers named after M.F.Akhundov was established in 1946 according to the decree of the Council of People’s Commissars of the USSR number 1313, dated on February 2 and the decision of the Council of Ministers of the Azerbaijan SSR dated on May 15. 108 students entered the Institute in the first academic year, 28 collaborators worked at the Institute under the staff schedule. There was first graduation of the specialists received a qualification of the Russian language and literature for the Azerbaijani schools date of on July 30, 1948.
This educational place became a traveler of glorious and sacred way for long years by achieving its successes together with higher education diplomas of the graduates of 1948 year. There were much valuable passengers – teachers, scientists, technical collaborators of this sacred way.There were large-scale structural changes in all activity fields of this Institute up to date. Great successes have been achieved and these successes continue at present, large projects are implemented.
In the background of all these changes, thr only thing remains constant and maintained its name by improving during all of these years. This is the speciality of the Russian language and literature as a core speciality. This speciality is considered leading speciality of the Pedagogy Faculty at present time being one of the basic columns of the Azerbaijan Pedagogical Institute of the Russian Language and Literature named after M.F.Akhundov. The Faculty of Pedagogics has also its wealthy history among the faculties created upon APRLL named after M.F.Akhundov which later was renamed to the Baku Slavic University by expanding its profile according to the decree of Heydar Aliyev, the President of the Republic of Azerbaijan dated on June 13, 2000.

Three specialties and bachelors are prepared in addition to the Russian language and literature for the secondary schools of Azerbaijan Republic at the faculty of Pedagogy. These specialities are the followings:
1. Primary School Teacher
2. Social and psychological services for education
3. Preschool education and training
Four departments operate under the faculty of pedagogy:
1. Department of the Russian language and intercultural communication;
2. Department of Pedagogy and Psychology named after S.Shafiyev;
3. Department of Primary Education;
4. Department of Mathematics and Computer Science.
Centers, circles and clubs compatible with the speciality operate under the departments, such as:
The circles «Let’s speak Russian» , «Russian poetry lovers» function at the chair of the Russian language and intercultural communication:
The club of students psychologists» , «Social-psychological service» - at tge chair of Pedagogy and Psychology:
«Natural sciences» , «Artistic reading» , «Pedagogic circle» - at he chair of Primary Education:
The circle «Fractal» - at the chair of Mathematics and Computer Science:
Educational and cultural center of Russia, Moscow audience, Educational and cultural centers of St. Petersburg have an irreplaceable role in the implementation of quality education under the faculty.
The following personalities were the deans of the Faculty of Pedagogy during separate periods: prof. Svaricevski A.A., prof. A.Shahtahtinsky, sen.lect. E.A. Aliyev, sen.lect.
R.M.Rasulov, prof. M.G.Gojayev, prof.V.I.Mamadov, prof. R.S. Mirzayev, prof. E.R.Piriyev, prof. N.H. Nabiyev
Our students participate closely in the university life .They take an active part in the work of the Student Scientific Society and other public organizations, carry out various charity events, have trainings at the schools locating in the tent camps for refugees and internally displaced persons.