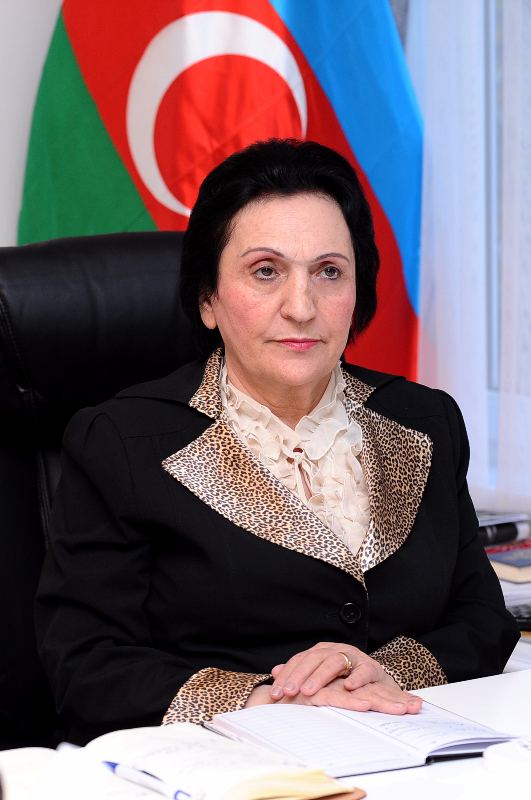 Aliyeva Nurlana Muzaffar qızı was born in 1946, august 28 in Ganja in intellectual family. In 1964 she has finished secondary school number 6 named after G.Gabbarli with excellent marks and entered to the Phylology faculty of Baku State University.

In 1988 she defended the PHD work on the theme of «Contemporary country in Azerbaijan pictorial prose» and got a degree of scientist of PHD. In 1990 she was appointed as director to Azerbaijan State Pedagogical College. Since 1995 she is a member of New Azerbaijan Party, and since 1998 a member of Political Council of NAP.

During 2000-2005 she was a member of the State Committee for Prisoners and Hostages. In 2004 she defended the Doctor`s thesis on the theme of «In 60th – 80th heroism and stylistic research in Azerbaijan prose» and achieved the title of scientific degree or Doctor of Philology by decision of High Attestation Commission near the President of Azerbaijan Republic. In 2004 she was rewarded with the name «Honoured teacher» by the arrangement of the President of Azerbaijan Republic.

Since 2004 she was elected as a member of correspondent of the Academy of Phychology and Pedagogics of Russia Federation.
In 2006-2012 she was a member of Defence Council of Doctor`s of Sciences near the ANAS Literature Institute named after Nizami.
In 2007 she worked as the Deputy of the Chief of NAP on Yasamal district, then was elected as the Chief of The Yasamal NAP Women`s Council. In 2008 she was rewarded with the «Glory Order» by the arrangement of the President of Azerbaijan Republic.

In 2009 she was elected as the Chief of the NAP Republic`s Women`s Council. In 2009 she got a «Professor» diploma of High Attestation Commission near the President of Azerbaijan Republic. Since 2009 she is the Editor-in-Chief of social-political and scientific-publicistic jourmal
«Zariflic».

Since 2013 she is a member of NAP. She is the author of more than 200 scientific-publicistic articles, 15 books and two textbooks. Not only in scientific-pedagogical sphere, she`s taken an active part in social-political life of Azerbaijan and regularly made a speech on various themes in Mass Media, published different articles.

In 2016, April 8, Nurlana Aliyeva was elected as a Councillor of the Minister of Education. In 2016, June 23 she was elected as a Rector of Baku Slavic University. At the beginning of the 2016-2017 academic year the fundamental repair works started at the university has allowed to established again material-technical base of all auditories, educa-wed to established again material-technical base of all auditories, educational-cultural centers, the research laboratories and departments and the transition to electronic governance in the organization of education and university administration. The new language laboratory room was created, the 110-seat assembly hall was renovated to translation equipment
installed, gave a completely different design to the museum of the university, foyer and the entrance of the teaching corps.