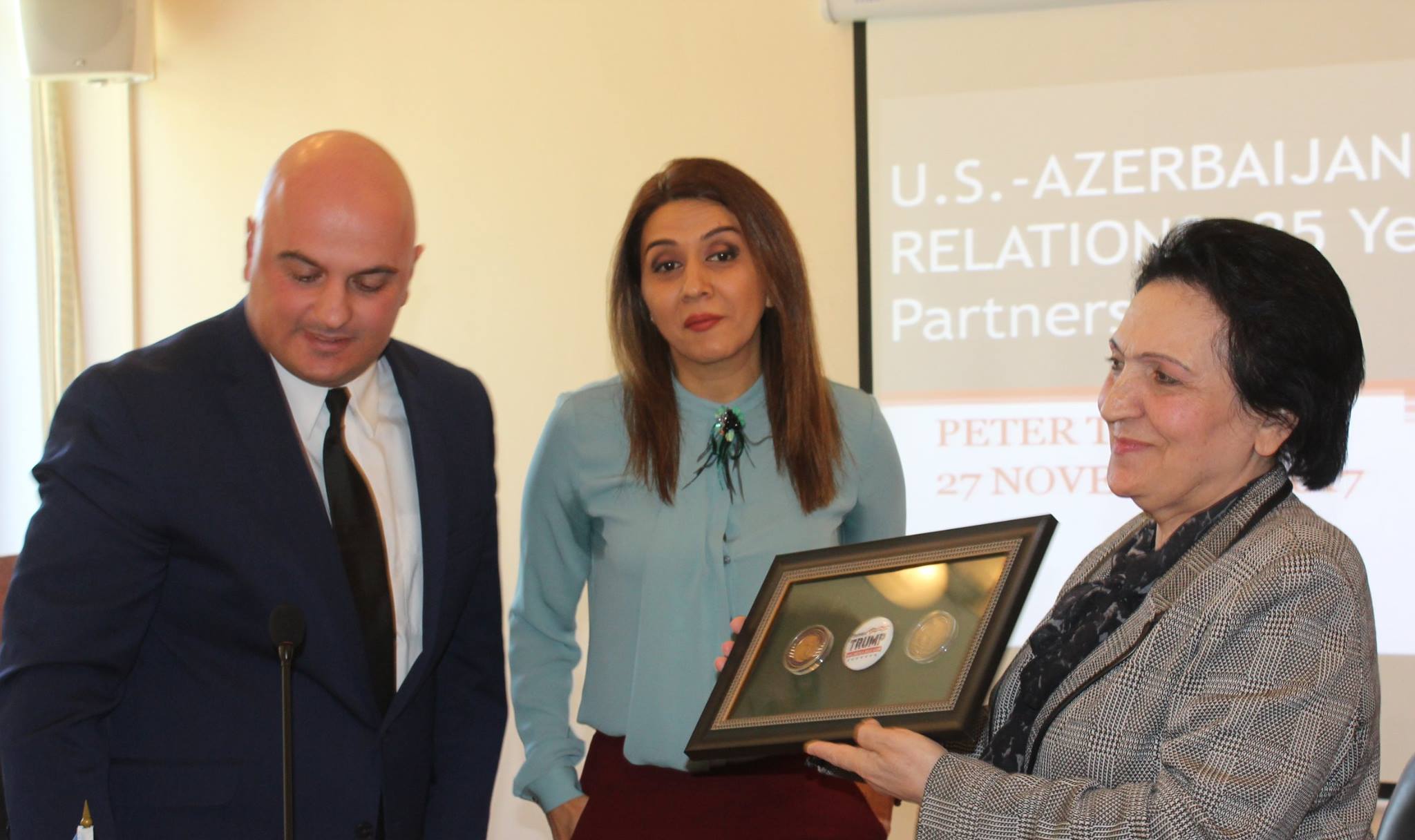 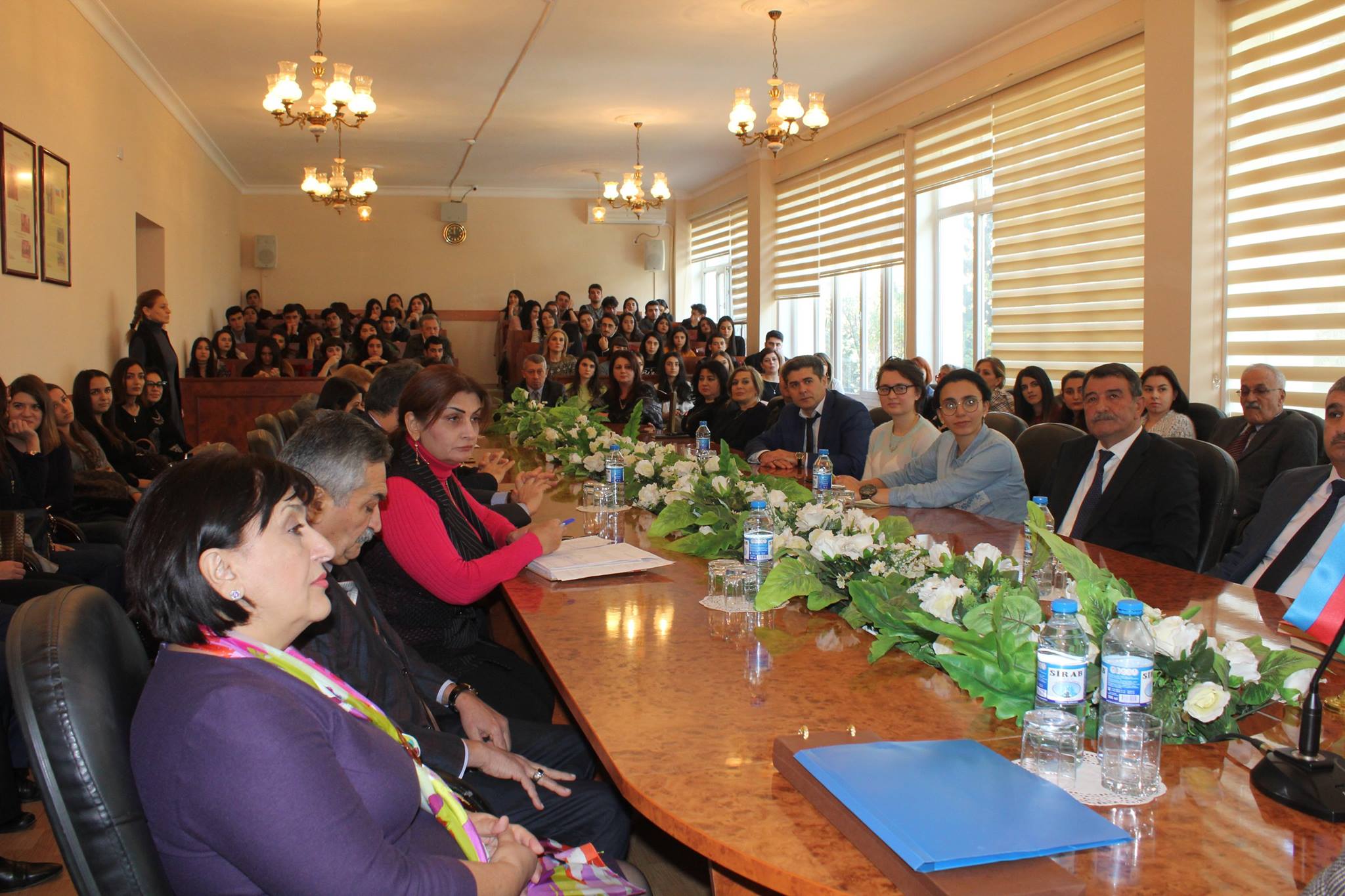 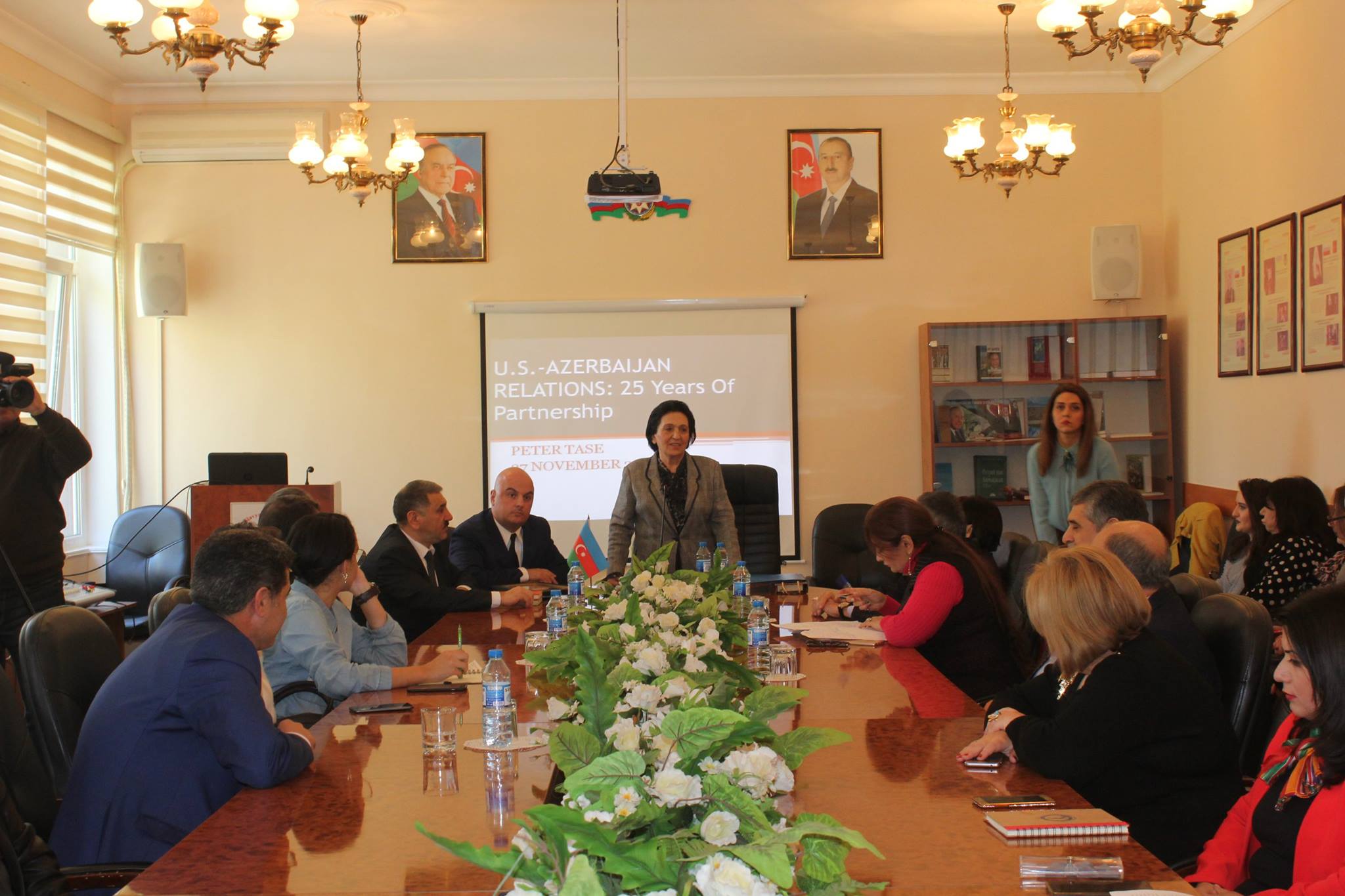 American political scientist, international journalist Peter Theis, who arrived in our country at the invitation of the President of the Republic of Azerbaijan, appropriated two medals of the highest level of the United States of America to the Baku Slavic University (BSU).
Leadership and faculty staff of the university took part in the presentation ceremony. Recall that this year the famous American political scientist, who has cooperated with BSU since 2016, performed before students with several reports and conducted trainings on educating young people.
At the beginning of the event, the American diplomat read his last lecture and answered questions on the issue of students’ interest.

Then the rector of the BSU, Professor Nurlana Aliyeva spoke.  She said that Peter Theis, who has frequently visited Baku in recent years, spoke positively about our country in the international press, as well as made serious political statements in connection with the Nagorno-Karabakh conflict and defended the fair position of our republic at international events.
N. Aliyeva said that today the basis for the policy of multiculturalism, which is an integral part of the state ideology of Azerbaijan, includes such qualities as sincerity, humanism and philanthropy.

Currently, President Ilham Aliyev successfully continues to implement this policy, thanks to which Azerbaijan is on a par with the developed countries. The rector emphasized that due to this successful policy, the Nagorno-Karabakh conflict will soon be resolved. According to her, "The Karabakh problem is a great sorrow for us. President Ilham Aliyev always says: "Azerbaijan is a strong state with a strong army!"

The Azerbaijani people believe that our army, equipped with modern technology, patriotic sons can liberate Karabakh in a short time. But we do not want bloodshed; we want the liberation of our territories by peaceful means."
As N.Aliyeva said, in this case, fair world politicians play an essential role, among which Peter Theis can be mentioned. She thanked him on behalf of the faculty staff and students of the BSU and said that the Azerbaijani people show concern and hospitality towards fair people.
The American political scientist noted the high level of education in BSU and was glad to read here his lectures. According to Peter Theis, Azerbaijani youth is very talented and has great potential. He expressed the desire to make presentations in the BSU in the future. For the ideal educational environment of the university, training conditions that meet modern requirements, Peter Theis presented N.Aliyeva with a gift prepared by the Museum of the US Congress, as well as medals symbolizing the American flag and the Statue of Liberty in Washington. Peter Theis also donated Donald Trump's Campaign Logo to the university. He showed his desire to drink tea in Karabakh after its release.