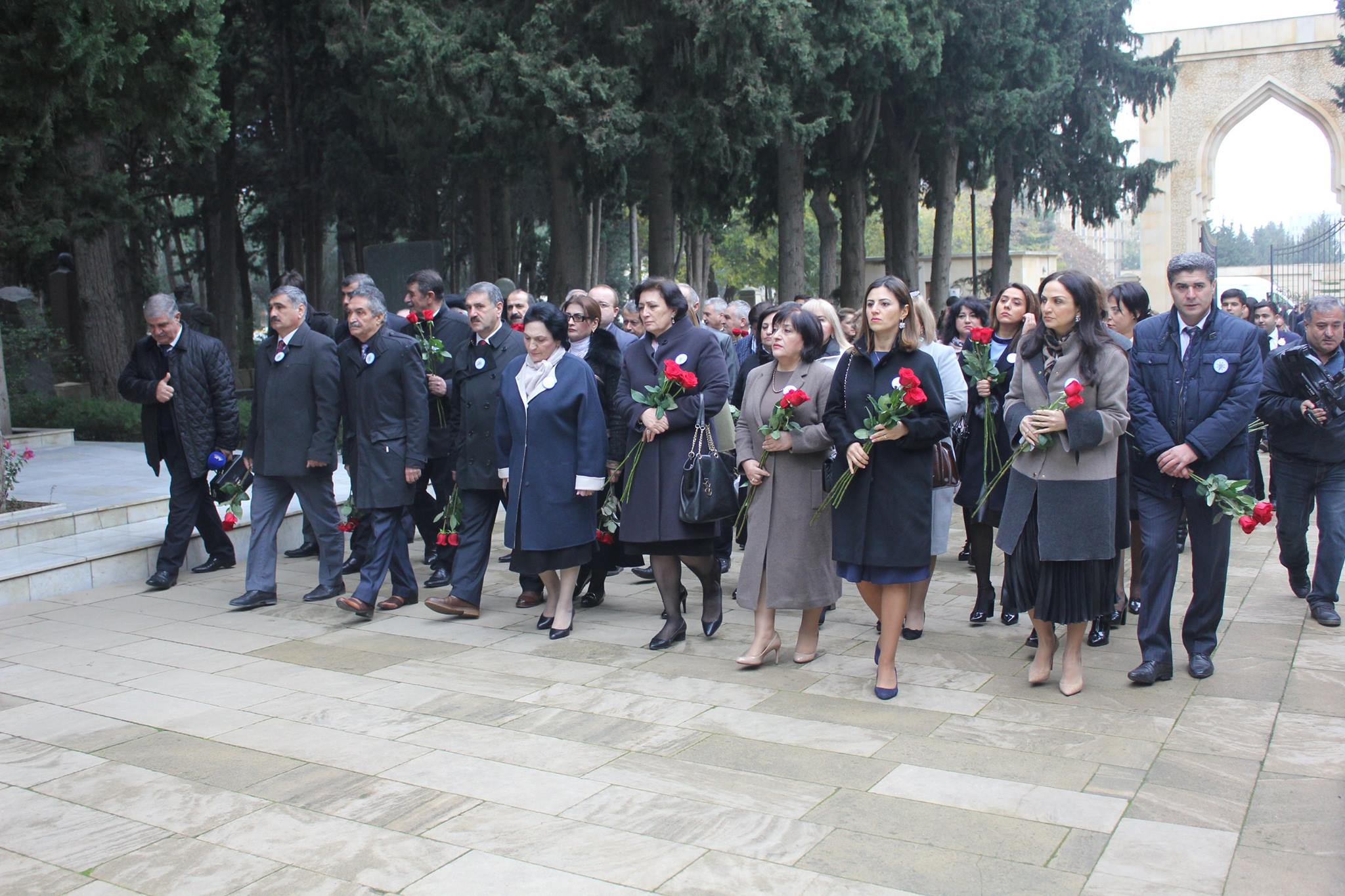 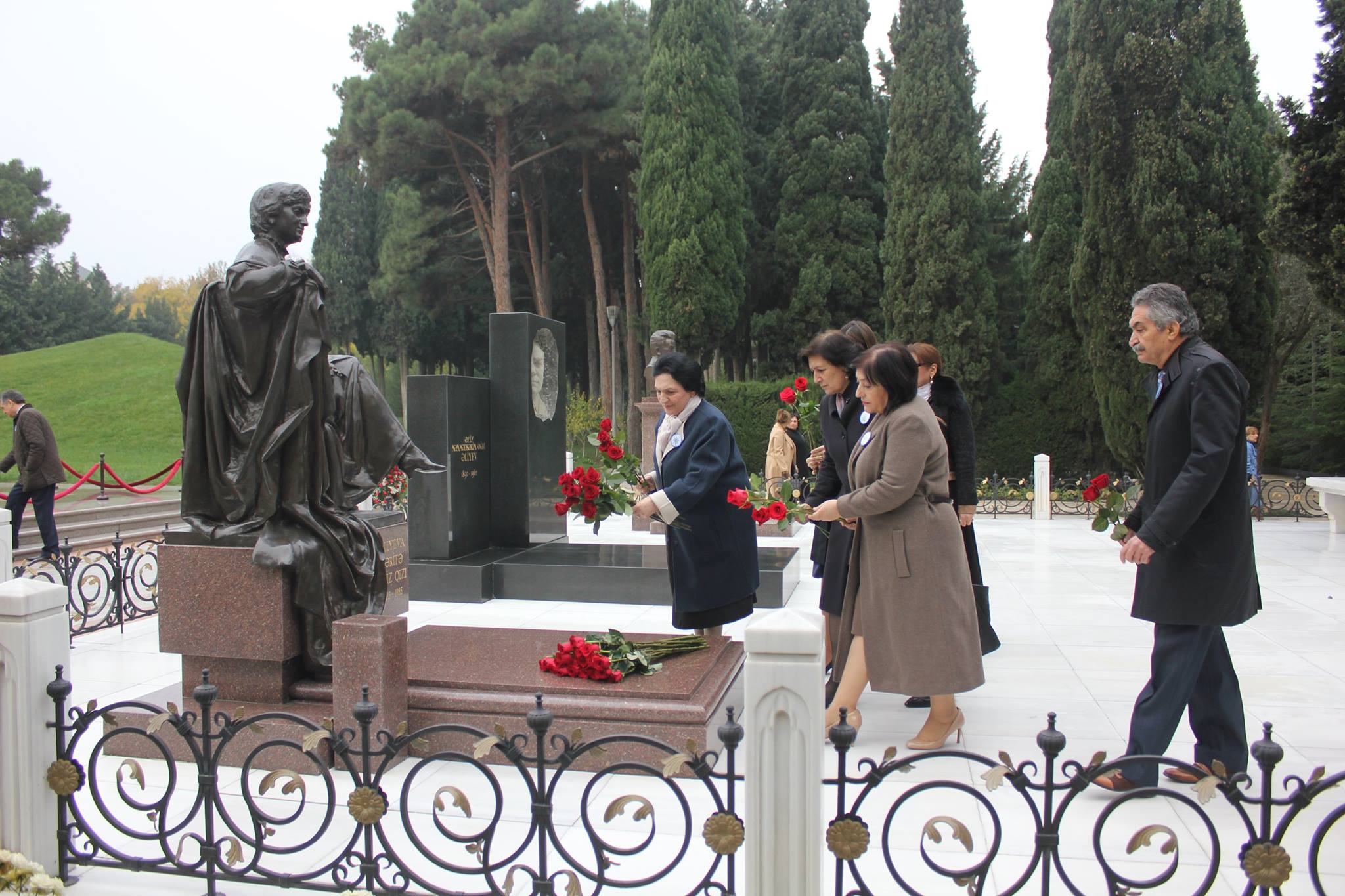 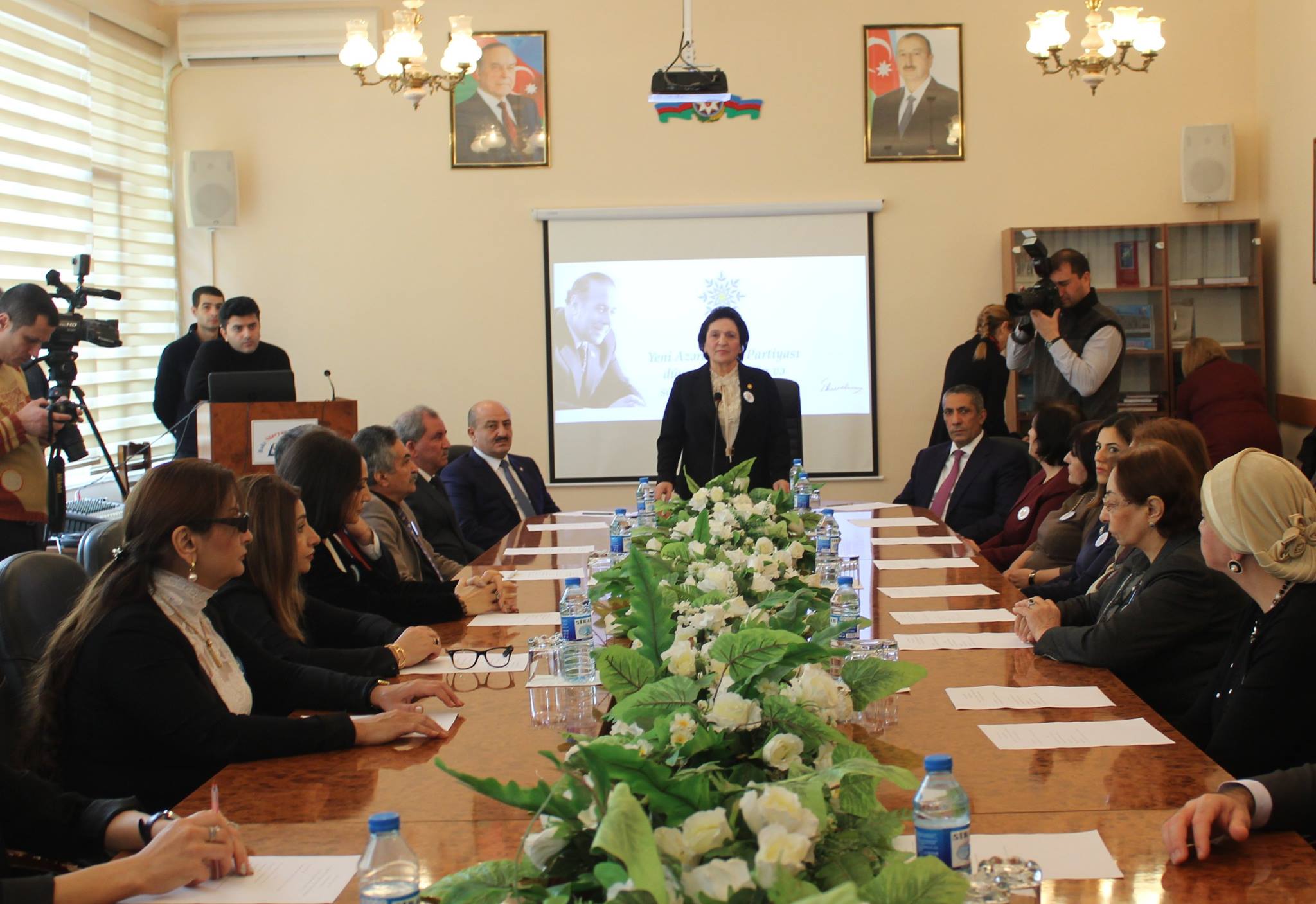 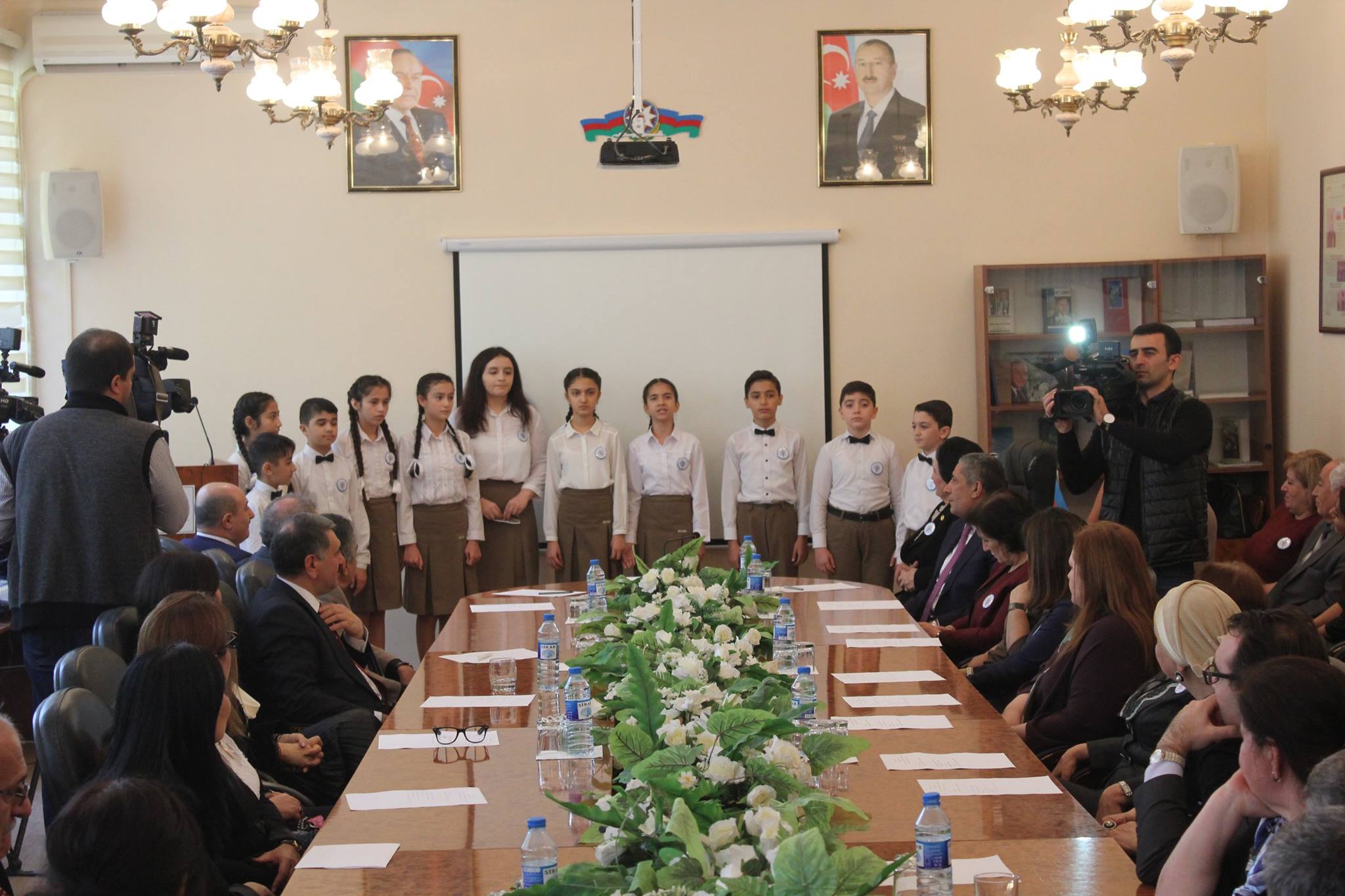 An important event dedicated to the 25th anniversary of the New Azerbaijan Party was held at Baku Slavic University on November 16. Deputy Executive Secretary of the NAP Siyavush Novruzov, head of Nasimi District Executive Power Asif Asgarov, chairman of the NAP Malahat Ibrahimqizi, the member of the YAP Women's Managerial Staff’s Board of Directors Rena Aliyeva, Director of Hygiene and Epidemiology Center Sarah Hasanova, Chairman of YAP Yasamal District Women Council Tamella Shahbazova, Deputy Chairman of the State Committee on Women, and Children's Issues Aynur Sofiyeva, the chairman of the Women's Council of Surakhany region Zakiya Musayeva, members of parlament Sahiba Gafarova, Sevinj Fataliyeva, and representative of the Ministry of Education Ehlikat Adigozalov participated in the event.

The event participants laid wreaths and flowers in front of the monument to National Leader Heydar Aliyev in Honorary Alley before the meeting.

The event started with the National Anthem of the Republic of Azerbaijan.

The rector of the university, Professor Nurlana Aliyeva opened the event at the conference hall of BSU and talked about the extremely important role played by the New Azerbaijan Party in the dynamic development of modern Azerbaijan over the past 25 years. He said that the New Azerbaijan Party, founded with the initiative and blessing of National Leader Heydar Aliyev, successfully carried out lots of trials and highly provided the people's ideas and desires. N. Aliyeva underlined that under the leadership of President Ilham Aliyev, the NAP dignifies our national interests dearly and tries to realize every citizen's political and economic ideal and contributes to the comprehensive development of our country. The President reiterated the idea that “the NAP party today is not only the leading political force of our country, but also the largest party in the South Caucasus.”

While speaking about the New Azerbaijan Party's youth policy and concern for the new generation, she stressed that Azerbaijan's growing economic power plays an important role in ensuring the physical, intellectual and spiritual development of young people and solving their social problems. He said that today's economic achievements of Azerbaijan enable innovative ideas and initiatives to take more effective measures to reveal young people's knowledge and skills and to implement large-scale programs and projects. The rector assessed the participation of more students in the New Azerbaijan Party as a youth's confidence in the New Azerbaijan Party. According to N.Aliyeva, in 2016, 172 teachers, 208 students in the university are the members of the New Azerbaijan Party, and in 2017 these figures reached 285 and 331 respectively. He said that today, young people are trying to test their strength in the state building, in raising the political power, economic power of our country, and the rise of moral and cultural potential.

N.Aliyeva spoke about the important role of Azerbaijani youth in strengthening the defense power of our country. The rector evaluated the courage and heroism of the young soldiers of Azerbaijan as a historical example in the battles last April and said that with the strength of our army, we can soon liberate our lands entirely from enemy occupation. "But we do not want bloodshed and massacres to be tolerated, so we want to return our lost land peacefully."

Aliyeva praised the active involvement of youth in the social, economic and socio-political life of our country as a commendable event. "Generally, young people are gaining success in science, education, culture, sports and military training, promoting Azerbaijan in the world, they make a worthy contribution to strengthening their independence. " She underlined the importance of the education of young people and deep knowledge of the current conditions of rapid development of science and technology around the world. N.Aliyeva said that there were all conditions at Baku Slavic University and called on young people to benefit from this opportunity.

Then a video about the 25-year activity of the New Azerbaijan Party was presented.

Deputy Executive Secretary of the NAP, member of parliament Siyavush Novruzov started his speech with reference to some facts concerning the different periods of the National Leader's political activity. He noted that the National Leader was surrounded by people's love and love during the Soviet era, both during the struggle for independence and in the independent state of Azerbaijan in the course of state building. Novruzov explained that it was not without reason, due to Heydar Aliyev's exceptional personality, to the nation, the people, to Azerbaijan.

S.Novruzov assessed NAP's management history as honor of Azerbaijan. He linked the Party's success with its foundation on the principles of integrity and purity.

Deputy Executive Secretary said today that 40 percent of the party seats are youth. However, he emphasized that women were selected with special activeness in the party.

Asif Asgarov, the head of Nasimi District Executive Power, started his speech with the provisions put forward by the head of the country in his report on the 25th anniversary of the NAP. He said that the speech of the President was characteristic of the program and put forward concrete tasks before each member of the party. He said that these tasks are based on the improvement of the people's life and the country's social and economic situation. A.Asgarov pointed out the role of the New Azerbaijan Party in the country's economic growth: "Under the leadership of H.Aliyev, when the Yen Azerbaijan Party came to power, the Reserve Fund had only one million funds, and now this figure has reached 50 million".

NAP chairman Sevinj Akhundova described the 25-year history of the New Azerbaijan Party as a "success story and success story" in BSU. He reminded that the party was created in a very difficult time, over one million refugees and IDPs in the country, the economy was completely dispersed, and the conflicts on the ethnic-religious ground were taking place. He pointed out that the New Azerbaijan Party has taken the country out of the crisis and transferred it to a great economic development path. S.Akhundova pointed out that the NAP cooperates with the serious political structures of many countries around the world today and plays an important role in the international integration process.

Representative of the Ministry of Education, Ehlikat Adigozalov, spoke about the construction and landscaping work in the country today. He underlined that 3 thousand of 4147 schools were reconstructed in the country. The employee of the ministry said that while 25 years are not a big time, it is equal to the age of socio-economic life of Azerbaijan.

BSU student Sevinj Alizadeh noted that the New Azerbaijan Party always pays special attention and care to young people. He underlined that the main purpose of the state's youth policy is to support youth initiatives.

Then, students of the School-Lyceum School of BSU said poems about patriotism.

During the event, the party's membership card was presented to 19 people applying for the NAP.