THE CHAIR OF JOURNALISM 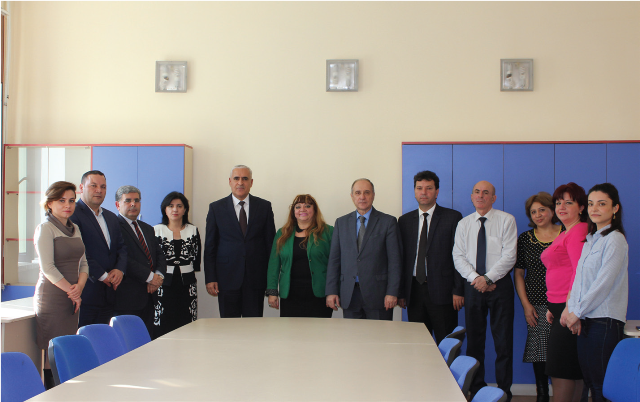 At Baku Slavic University, «Journalism» as a major speciality was introduced in the curriculum of Azerbaijan Literature Department, Faculty of Philology in 2005-2006 academic years. Division of Journalism was created in the academic year 2008/2009, and Department of Journalism was created on its basis in 2010.
Since 2009, Baku Slavic University with the support of the Council of Europe launched the project «Supporting the Development of Journalism Teaching in Azerbaijan». As part of the project, «New Media» and «Photojournalism» laboratories, equipped with new computers, projectors, video and photo cameras has been created. For the first time in Azerbaijan there was established an educational base on photojournalism, that expanded opportunities for preparation of professionals in this field. All this contributed to the improvement of the quality of teaching, the improvement of professional skills of students and future graduates. The project also prepared materials for textbooks in five areas: «Introduction into communication», «Television journalism», «Radio journalism», «New media», «Photojournalism».
In 2011, the Faculty of Azerbaijan Philology and Journalism was established, on the basis of which the Departments of «Theory and Practice of Journalism» and «New media and communication technologies» began to operate. In February 2016, due to structural changes, the departments were merged and formed a single chair of journalism.
The priority areas in scientific and practical work of chair of Journalism are «Investigative journalism», «Journalism and Public Relations», «New Media», «Social journalism», «Photojournalism». The scientific-theoretical base of the department  includes textbooks, scientific and methodical works, and curricula in areas such as history of Azerbaijan journalism, basics of radio-television journalism, TV journalism, TV Criticism, basics of TV presenter skills, ethics in TV news, organization of talk-show programs, radio journalism, information warfare, speech culture, technology and media technology, marketing and advertising in mass media, sports journalism, language and style, literary editing, history of foreign journalism.