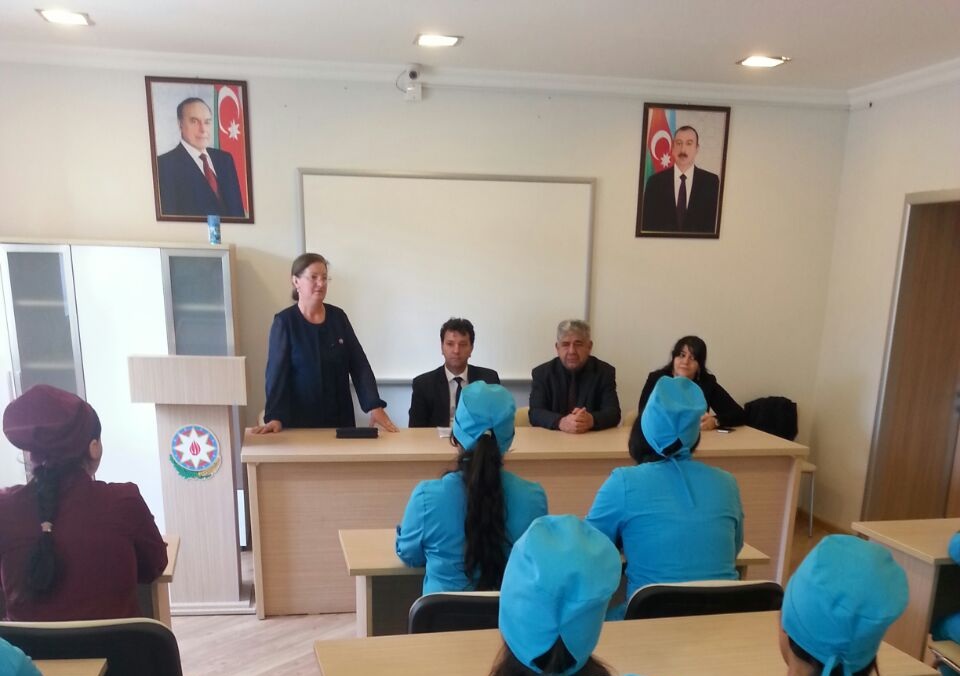 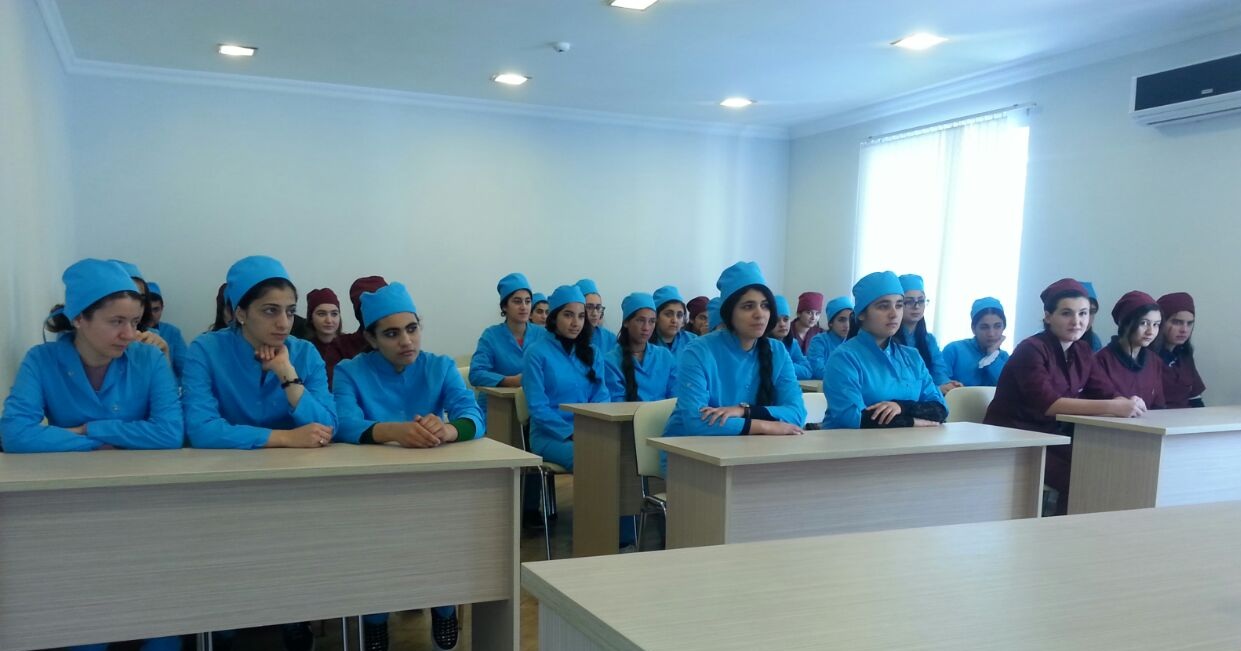 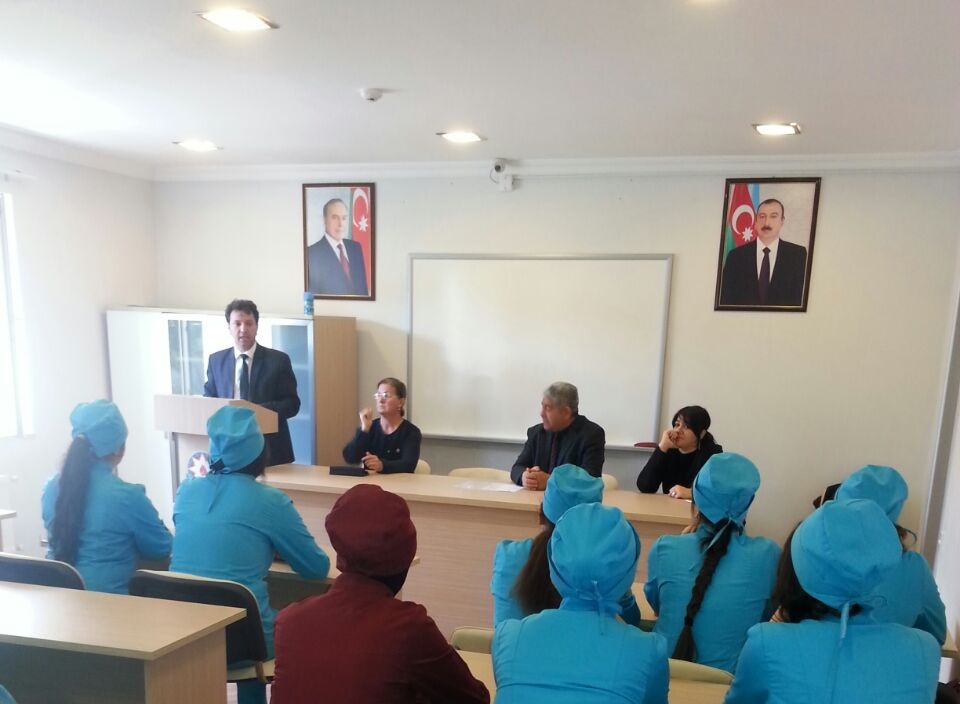 On November 16th Lecturer of the Foundation under the President of the Republic of Azerbaijan, Associate Professor of the Journalism Department of the Baku Slavic University Mubariz Ahmadov delivered a lecture on "The way of development of the Azerbaijani people" on the National Revival Day at Saatli Medical College.

Tarana Babayeva, who briefly informed the students on the subject, gave gave the floor to the lecturer.

The Lecturer M. Ahmedov greeted the students and congratulated all the participants on the National Revival Day, spoke about the essence of the day and the way of development of the Azerbaijani people. Since 1988, the Kremlin has prevented the national liberation movement of the Azerbaijani people, despite the ground allegations of Armenia against Azerbaijan, the USSR leadership's support for Nagorno-Karabakh separatists, the outbreak of protests by activist activists in Baku in national rallies and the collapse of these rallies by the USSR interior troops. and said that the challenge movement, which started on November 17, 1988, laid the foundations of today's free Azerbaijan.

However, the political inequities and irresponsibility of the leaders of the country who came after the government and the failure of the Nagorno-Karabakh problem led to a civil war in Azerbaijan, and after the national leader Heydar Aliyev's return to power on this difficult day of the nation, the threats have been extinguished.

M.Ahmadov said that, thanks to the efforts of Heydar Aliyev, the implementation of a number of international projects after the ceasefire between Armenia and Azerbaijan and political stability in Azerbaijan have created conditions for the economic growth of the country.

Noting that the Baku-Tbilisi-Ceyhan oil and Baku-Tbilisi-Erzurum gas pipelines, the so-called "Contract of the Century", have made a substantial turnaround in the Azerbaijani economy, the continuation of such important projects is the opening of the Baku-Tbilisi-Kars railway, the North-South international transport corridor said they would give impetus to the development of the non-oil sector in Azerbaijan.

The President of the country, Mr.Ilham Aliyev, resolved the Nagorno-Karabakh problem and emphasized the fact that no separatist regime will be granted to Armenia, as well as to the separatist regime, Ahmadov said that the people and the government were united in the April wars. He said that the Karabakh war is not over yet and he believes that sooner or later this issue will be settled within the territorial integrity of Azerbaijan in line with international law.

M.Ahmadov propagation of national values in the world, putting Azerbaijani mugham on the list of UNESCO's intangible cultural heritage, opening of a museum of mugam in Baku, carpet weaponization or theft of Armenians, as well as other issues such as First Vice President Mehriban Aliyeva's role was emphasized.

Touching on the first European Games in Baku in 2015, the lecturer praised Azerbaijan as a confirmation of the fact that Europe is no longer behind the big-scale competitions.

Speaking of those who want to deliberately ignore Islam in the world and declare a term such as "Islamophobia" in Azerbaijan this year, "Year of Islamic Solidarity" and a worthy response to the IV Islamic Solidarity Games in Baku, 95% of Azerbaijani people despite the fact that he has faith in all religions.

At the end of the lecture, the lecturer said that they should be attentive to reading their lesson and not being influenced by those who use social networks.

Director of Medical College Kamal Mursalov highly appreciated the lecture and expressed his deep gratitude to the lecturer, Tarana Babayeva and the leadership of the Knowledge Foundation, saying that such lectures play an important role in educating the younger generation.