Deputy Minister of Energy of Bulgaria was the guest of BSU 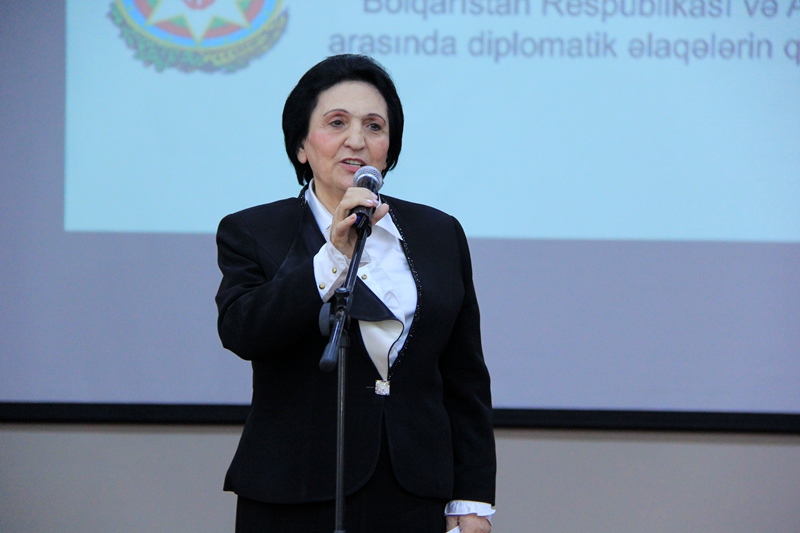 On June 1, Baku Slavic University (BSU) hosted event on the 25th anniversary of the establishment of diplomatic relations between Azerbaijan and Bulgaria. Ambassadors Extraordinary and Plenipotentiary of USA, Romania, Hungary, Poland, Ukraine, Belarus, Turkmenistan and other countries to Azerbaijan, president of ANAS, academic Akif Alizade, chairman of the Committee of the Milli Majlis, academic Ziyad Samadzade, deputy of Milli Majlis Asim Mollazade, deputy chairman of the State Committee for Family, Women and Children Affairs Sadagat Gahramanova and other officials participated in the event.

Event started with playing National Anthems of Azerbaijan and Bulgaria.

Rector of Baku Slavic University, professor Nurlana Aliyeva who made an opening speech in the event, highlighted that diplomatic relations between independent Republic of Azerbaijan and Republic of Bulgaria is mentionable with great work although it doesn’t cover a wide stage from historical perspective.

Ambassador Extraordinary and Plenipotentiary of the Republic of Bulgaria to Azerbaijan Mrs.Maya Khristova greeted guests by making a speech, spoke about history of relations between our countries and today’s reality. She noted Azerbaijani nation as tolerant, giving special importance to appreciation of multicultural values. Ambassador stated that there is no need for religious, racial, national diversities here and she didn’t face such type of situation while working in our country. Saying that the Republic of Azerbaijan is the leading state in the region, Ambassador mentioned the long-lasting cooperation on economic, political, as well as cultural and educational spheres has already fruited.

She informed that sufficient trained specialists grow on the Bulgarian language and literature in Azerbaijan and cadres are trained who study Azerbaijani culture, history, language, literature in Bulgaria. Ambassador emphasized her hope for further development of cooperation in this field.

Then Deputy Minister of Energy of the Republic of Bulgaria Zhecho Stankov gave information on the role of Azerbaijan in Europe's energy security in his speech.

Deputy Chief of the Second European Department of the Ministry of Foreign Affairs of the Republic of Azerbaijan Qismat Gozelov spoke about economic, cultural issues between our countries and participation of Azerbaijan in Europe's energy supply projects.

Event continued with artistic part.BSU students and pupils of School Lyceum Complex functioning at University performed poems and songs in the Azerbaijani and Bulgarian languages, demonstrated dances in the artistic part.