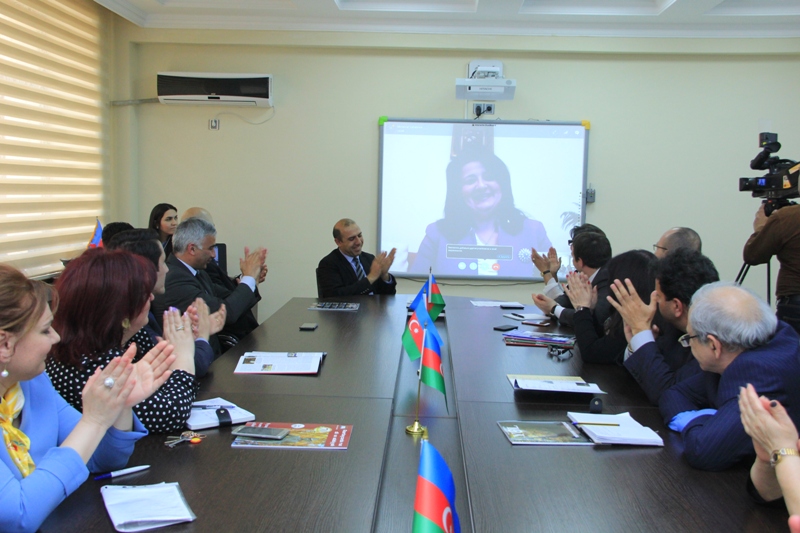 The event in the framework of “Diaspora lessons at high schools” which is voluntarily conducted by Union of Journalists of the Diaspora was held at Baku Slavic University (BSU).

Opening the event, vice rector for Educational affairs of Baku Slavic University Khanim Sultanova greeted participants and guests, expressed her pleasure with the implementation of the project at BSU. Highly appreciating the project “Diaspora lessons at high schools” of UJD, she notified that these events will play an important role in the Diaspora activity of the young and getting acquainted with its representatives. Kh.Sultanova particularly noted the importance of Diaspora activity in uniting around national ideas of Azerbaijanis living abroad. She expressed her confidence in getting significant results in the relevant field due to joint activities of Diaspora organizations and journalists. Vice rector mentioned the necessity of holding such events regularly and systematically, including such lessons into the curriculum.

Speaking about aim of the project, chairman of the Union of Journalists of the Diaspora Fuad Huseynzade noted that the main targets are to develop students’ thought about the Azerbaijani Diaspora, strengthen the role of the young in conducting information war.

Then speeches of chairman of “Holland Azerbaijan House” Elkhan Mirhashimli, chairman of the Russian representation of the Azerbaijani-Slavic Youth Association Togrul Allahverdili, chairman of the Council of Azerbaijani Youth in Poland Nail Ahmad, teacher of Academy of Administration under the President, politician Zaur Mammadov, Secretary General of Union of Journalists of Diaspora Siyavush Amirli were listened with interest.

Speakers comprehensively talked about the role of National Leader Heydar Aliyev’s ideology of Azerbaijanism in uniting Azerbaijanis living abroad around a single idea, activities done by the government of Azerbaijan in the direction of Diaspora’s development, perspectives of students’ Diaspora activity abroad, role of the Azerbaijani youth in conducting information war.